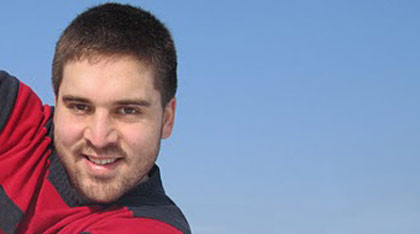 For Nicolas Dousse becoming a visiting short-term scholar was as much about the opportunity to experience a foreign culture as it was to delve deeper into an academic pursuit.

“I was interested on the one hand because of the high scientific experience I could get by coming to this university and on the other hand it gave me a unique possibility to learn about the United States’ culture and way of life from the inside,” recounted Dousse, who is studying Aerospace Engineering at the University of Illinois, Urbana-Champaign.

Dousse said he was impressed by the ease in which he was able to communicate with his colleagues even before his arrival. “A professor back at my school in Switzerland gave me the name of the professor I’m visiting and I took contact directly with him.”

“I have found that it’s really easy to speak to somebody without knowing him at all,” Dousse added. “People are really professional and helpful here – even the bus drivers!”

While in the United States, Dousse is focusing his research on air traffic management. “The goal is the optimization of the number of aircraft flying into the air space and minimizing the delays they could encounter,” he explained.

In addition to his work, Dousse has had the opportunity to experience the American culture he was curious about by checking out activities at the university and in nearby Chicago. In particular, he has enjoyed attending professional sporting events.

“The thing that surprised me the most was the reaction of Chicago Blackhawks fans during the National Anthem. Having already attended other sporting events, I knew that the National Anthem was played and that everybody stands and is respectful but mostly silent,” Dousse said. “But at the hockey stadium in Chicago, everybody was applauding and shouting as loudly as they could. It was an amazing experience!”

Douse said he would encourage other scholars to pursue a similar opportunity. “I would definitely recommend this program. The chance to be able to mix work and learning of a new culture is worth the trip,” he said.