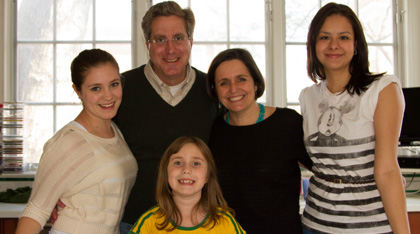 Our fourth Au Pair just started, and so and each of the first 3 were here for 2 years,so a little over six years.

Initially the idea of having someone who could live in our home and who could be flexible about hours was one of the things that first made this appeal to us.

We often, we have children in school so we need help early and late in the day but we also thought it would be a really great opportunity for our children to learn more about other countries in other ways of life.

It’s actually been really amazing having four different now Au Pairs from Brazil and being able to like spend.

I think it’s been six years now just like learning about this new culture and we just recently went to Brazil.

We actually went to you Brazil because our very first very first Au Pair Julianna was getting married and we were invited and we we wanted to go for the wedding, but we decided we’re going all that way it would be really nice opportunity to explore Brazil and spend time with both of our old Au Pairs that are still back in Brazil.

we are making brigadeiros and then it is a very sweet things from Brazil yea, its impact a lot my life because on I had a different background and I learned a lot with them and especially with the kids

Really I mean, for us at least, they definitely become part of our family and its a really interesting and I think a really great way to get to know new people and a new culture as well. Fernanda is our fourth Au Pair.

Hello, my name is Fernanda I’m from Brazil, São Paulo. And I’m here to be an Au Pair in america. And that allows me to to have the J-1 visa that it’s something that make me feel secure

A part of of having a family you know behind you it’s real important.

I feel like I’ll I’m a part of the family our children they have had this great opportunity to relate to people in addition to their parents,

and really think about them as a part of the family in different ways I think our children will be in touch and they will know that there someplace that some person who may be 12 hours by plane away from them but yet there’s a person who would as Thays did drop everything in her life.

She posted something on her Facebook page it said that family are the people you choose and that she really feels that we’re apart of her family and that was just that was for a girl to have that with, was great.