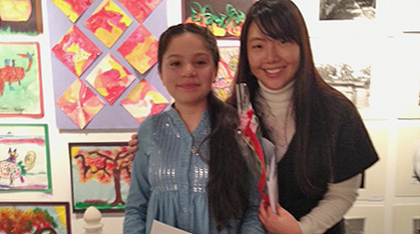 A WEST Student Learns to Lead Through Music

When music production major Eunbyul Baik was placed in Washington, D.C. through the Korea WEST Program, she was not expecting the vast cultural diversity the city had to offer.

“In Korea it’s all Korean people,” says Eunbyul. “The thing that surprised me most about coming to the U.S. was the cultural diversity. There are some travelers [in Korea] but it’s really one culture. But in the U.S., when I came here, even my host family was from Mexico and Ireland so it was really culturally diverse.”

“At first I thought it was really interesting, but as I started to associate with everyone, I started to feel like people are just people and no matter where you go they are just human beings.”

In Washington, D.C. Eunbyul worked out of the Sitar Arts Center – a community arts organization in the heart of the popular Adams Morgan neighborhood.

“Sitar serves more than 80 percent of students from low income families so that they can have the chance to learn arts or music,” says Eunbyul. “People sometimes think that’s a luxurious way of enjoying your spare time but that’s not true. I found that students were really getting better through music.”

“People from the State Department said they expect [Korea WEST alumni] to be leaders in the next generation of Korea. At first I couldn’t really understand because I just studied music, how can I be a leader? I thought that being a leader is from a political area or economic area, but I realize I can be a leader. Music changes people individually and that changes the community.”

Eunbyul enjoyed her experience in the U.S. and learned key differences between the cultures of her home country and America.

“In Korea we speak in an indirect way,” says Eunbyul. “A lot of times so you really have to read the way people think, you have to read their mind. But in America, you really didn’t have to do it. It was clear, but at the same time it hurt me sometimes. I don’t think [Americans] want to be mean to me, but sometimes they were just too direct. So I had to really put myself into American culture. I really had to adjust myself to be really direct whenever I wanted to say something to an American.”

Through the Korea WEST program, Eunbyul had a well-rounded experience and encourages other students to be “brave” enough to step out of their country, and their comfort zone.

“Sometimes because this is not your country, you might feel really frustrated and really tired,” says Eunbyul. “In Korea, people are afraid to ask something because they judge before you even ask. But, I really want to ask people to be really positive and brave. Be brave enough to ask something that you don’t know.”