Participant Spotlight: BridgeUSA Research Scholar is Re-thinking the Timing of the Earths’ Biggest Mass Extinction, and the Diversification of Early Mammal Relatives 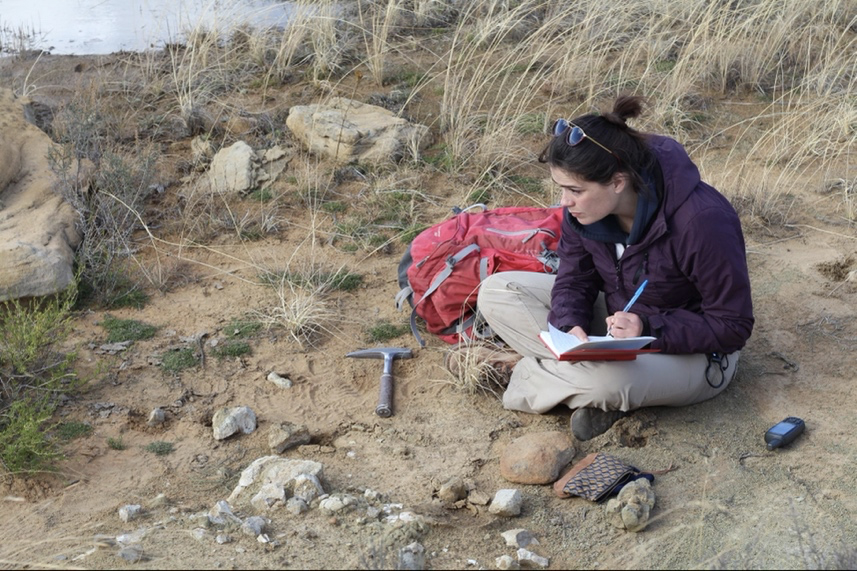 Pia Viglietti, a BridgeUSA research scholar at the Field Museum.

While “dinosaur” might be the first word that pops into peoples’ heads when they think of fossils, those big Jurassic beasts are not the only—or the most interesting—game in town for paleontologists. Case in point: Pia Viglietti, a BridgeUSA research scholar at the Field Museum, studies biostratigraphy and evolutionary change in southern Africa during and after the Permo-Triassic mass extinction. Pia joined the Field Museum in March of 2019, after completing her PhD and a postdoctoral fellowship at the University of the Witwatersrand, Johannesburg, South Africa. Since then she has been collaborating with Curator Ken Angielczyk and international colleagues, and already has 12 papers under her belt, including the description of several new species of the early mammal relatives known as dicynodonts, as well new species of crocodile and dinosaur ancestors.

The research that garnered the most attention was an April 2021 study, led by Pia, in Proceedings of the National Academy of Sciences (PNAS), which yielded new insights into the turnover of animals and plants after the largest of Earth’s “Big Five” mass extinction. This occurred at the end of the Permian period, some 252 million years ago, when large outpourings from Siberian Trap volcanism likely triggered calamitous climatic changes, including a runaway greenhouse effect and ocean acidification. These events had profound consequences for life on land and in the oceans, with an estimated 81% of marine species and 89% of land animals going extinct.

The extinction in the seas occurred relatively rapidly, geologically speaking (~100,000 years), and this timeline has long been used as the paradigm for timing extinctions on land. However, recent research in places like South Africa’s Karoo Basin, site of one of the best-preserved terrestrial Permo-Triassic fossils sequences, suggests that the two timelines may not be congruent, and the PNAS paper amassed concrete evidence of that. “People assumed that because the marine extinction happened over a short period of time, life on land should have followed the same pattern,” Pia noted. “But we found that the marine extinction may actually be a punctuation to a longer, more drawn-out event on land.”

This study is part of a decades-long research project on the end-Permian mass extinction event in the Karoo basin, which has involved many paleontologists from diverse backgrounds. The paper received wide press coverage, such as Discover, NY Daily News, Forbes, Notimérica, La República de las Ideas, and The Independent.

The research is a great example of the type of collaboration facilitated by BridgeUSA programs. The exchange of research scholars promotes the exchange of ideas, research, mutual enrichment and linkages between research and academic institutions in the United States and foreign countries. As Pia observed, “the J-1 program provided an opportunity that widened my collaboration circle, and also gave South African research a global platform. It has also been mutually beneficial for the Field Museum in fostering international collaboration. I was also able to contribute to improving public exhibits, and showcase my research at outreach and donor events.”