Employee of the Quarter!

I could not leave Sedona without introducing you to Richmond, a culinary intern from the Philippines who is training at Enchantment Resort. Much like Kosta Cvoro, the student I profiled in my last post, Richmond is excelling in his training at Enchantment. I know this because he was just awarded Employee of the Quarter! He was nominated by the resort’s executive chef, sous chef, and just about everybody he worked with, it seems. This young man has made quite an impression here! 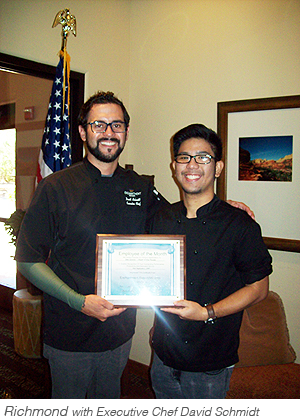 Richmond first studied management then decided to go to culinary school. During his internship, he rotated every three months to a different part of the kitchen to absorb the tricks of the trade from every angle possible. He told me that he has learned more than he ever expected mainly due to the chefs’ close and ongoing mentorship and supervision.

I asked Richmond why he decided Enchantment was the place for him. He said he was inspired by the youth and creative energy of Executive Chef, David Schmidt. Chef David enjoys training culinary interns because he welcomes the unique flavor and approach they bring from their home countries to his kitchen.  Richmond, in particular, is a very motivated young man who pushed himself to learn as much as possible, as quickly as possible.  The mutual respect that has grown between these colleagues and now friends was palpable during my visit.

Richmond told me that his J-1 training experience gave him the confidence he now has to start his own restaurant when he returns home. Of course, he will factor in his experience with Arizona cuisine by making his restaurant a Southwest-Asian fusion. It makes me hungry just thinking about it!


G. Kevin Saba serves as Acting Deputy Assistant Secretary for Private Sector Exchange at the U.S. Department of State's Bureau of Educational and Cultural Affairs (ECA). In this capacity, he oversees the Exchange Visitor Program, which brings around 300,000 foreign citizens to the United States annually to teach, study, and build skills. He is the Director for the Policy and Program Support Division in ECA’s Office of Private Sector Exchange.