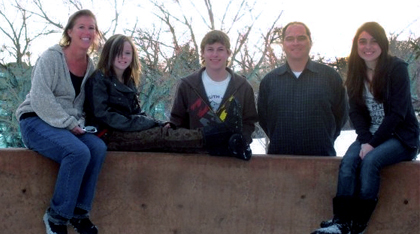 Their son’s desire to participate in an international exchange program became an unforgettable experience for the whole family.

Through the Lakewood Sister Cities Program in Jefferson County, Colo., Jim and Julie Longwell’s 16-year-old son, Brandon, lived and attended school in Australia for six months. The twist? An Australian teenager named Stephanie also traveled to Colorado and lived with the Longwell’s for half the year.

“Brandon wanted to do it, so we supported him,” said Jim Longwell. “At first, we were concerned about the cost and sending our kid to live with strangers in a foreign country for six months.”

But those concerns were quickly put to rest.

“Discussions with the coordinators, previous participants and their parents resolved all of the cost and procedural concerns.  And overcoming the concern of our son living with strangers was the easiest part,” he said. “The first time we had a chance to meet our exchange family via Skype, we realized that the coordinators could not have found a more suitable match.”

Stephanie came to live with the Longwell family first and then the two students went to Australia to live with her family.

“We were most surprised by how much we loved having Steph here with us and the sibling like relationship her and Brandon have,” Jim Longwell said. “She was is a perfect fit for our household and quickly became, and will remain, part of our family.”

The experience also had a positive impact on Brandon as an individual, according to his parents. As a result of the program, their son “became more outgoing and responsible.”

For Jim and Julie Longwell, the best part of the exchange experience was “the friendships that we have created and still have today.  Not just the exchange students, but many of the parents have bonded as well and continue to find reasons to get together.”