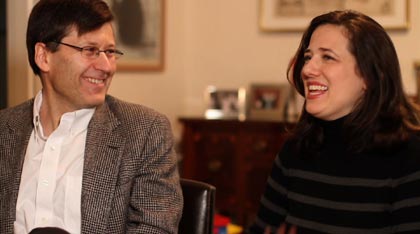 Inspiring wanderlust in their children

Catherine and Will Bruno hoped to one day pass on their love of the French language and culture to their two young sons and when the time came to seek out childcare, the au pair program offered the perfect opportunity.

Three years and three full-time au pairs later, the Brunos happily note that Nicholas, 3, and Andrew, 1, speak French as easily as English. And that’s only the beginning.

“The appeal was the notion of someone who can give an extra measure of personal attention and care and I think that’s certainly been true. We also wanted someone who could help the children learn a foreign language,” Catherine Bruno said. “Nicholas is three and he’s totally bilingual. He’s as fluent in French as he is in English. He’s able to turn to our au pair and speak to her in French and then immediately turn around and say something to a person with whom he usually speaks English with no problem.”

Getting to know their au pairs has also made the Brunos’ two sons more interested in the world around them.

“There’s definitely a real sense of curiosity that the children have about this person who speaks another language and makes them special foods,” Will Bruno said. “There’s also the personal relationship and the warmth and there’s the curiosity about the larger role.”

And the Brunos have also worked to introduce their au pairs to their household roles and traditions as well as American culture at large. “We take them on vacation with us so they get to see other parts of the country and help us while we’re on vacation so that’s been good for them in terms of their cultural education and also good for us,” Catherine Bruno said.

“Or just in terms of discipline even in child-rearing, I think they see different habits and different ways of interacting with children – some of them subtle and some of them not so subtle. We try to give them a good explanation for why we have decided to do things. They don’t always agree but it’s a good conversation.”

Will Bruno said he and his wife have worked hard to help their au pairs get settled into their foreign environment.

“The role of host mom and host dad is significant,” Will Bruno said. “I think the program is most successful with families who really want personal, energetic, loving childcare. But also are willing to provide support to au pairs throughout the course of the year. It works best when there are both of those pieces of the puzzle together.”

And they’ve continued to nurture their relationships with the au pairs even after they have left. “The ability to stay in touch has helped us a lot and also our three-year-old,” Catherine Bruno said. “Even with our first and second au pairs when he was very, very young, we could Skype and we could call and look at pictures. I sort of feel like we have nieces and nephews now spread out throughout the globe.”